The Mayor of West Devon has paid tribute to the "huge contribution" to the borough made by the winners of this year's West Devon Borough Council Mayoral Awards. 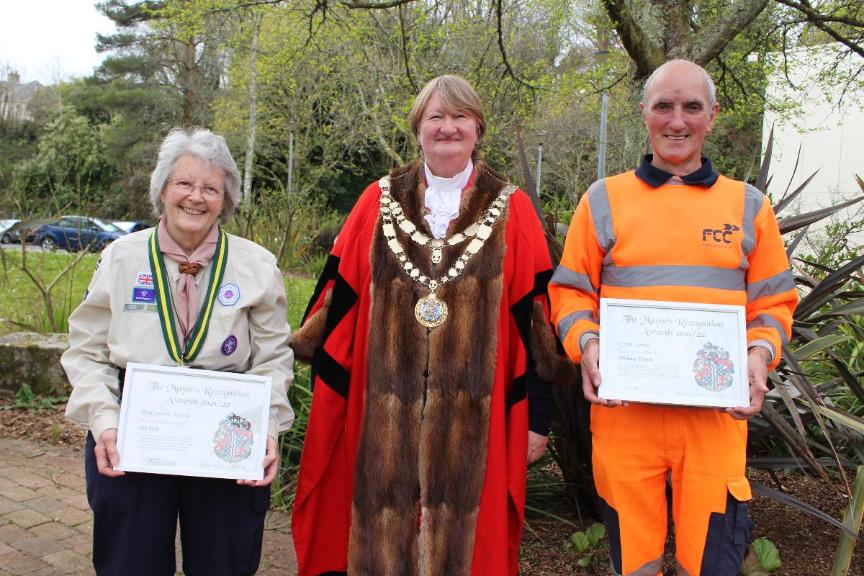 Among those to win awards are a dedicated volunteer of more than 50 years, a Hatherleigh resident who worked tirelessly to gauge people's experiences through COVID lockdowns and an Okehampton street cleaner, who regularly goes above and beyond the call of duty.

The awards made by mayor Cllr Caroline Mott were presented to their recipients on Tuesday 5 April.

West Devon Mayor Cllr Caroline Mott said: "We have seen some fantastic examples of people who make a huge contribution to West Devon in the nominees for this year's awards.

"Many of them make a big difference to their communities and the wellbeing of those around them and get little recognition for it, so it's wonderful to be able to celebrate those contributions with these awards. Congratulations to our winners, each and every one is hugely deserving."

More than 50 years of dedication has been recognised in the Long Service Award category, with the prize going to Tavistock's Elizabeth Cole. She has volunteered for the Scout Movement in Tavistock for longer than half a century, having also received the Scouting Association's highest accolade, the Silver Wolf Award.

Cllr Debo Sellis, who nominated Mrs Cole, said: "For so many years, Mrs Cole has volunteered, helping many youngsters enjoy the excitement and challenges of the world of scouting."

The more recent challenges of the COVID pandemic and how it's affected the community of Hatherleigh have been documented by Donna Lewis, the winner in the Over 18s category.

Rosemary Lock, who nominated Donna, said: "Donna Lewis worked endless hours during and after the COVID lockdowns gathering information from residents and organisations within Hatherleigh, to ascertain their experiences, thoughts, poems, diary entries and photos and drawings during lockdown."

She added the book published as a result of Donna's hard work would be a "lasting historical record of these times for Hatherleigh".

The final main award winner was Rodney Woods, who works as Okehampton's dedicated street cleaner. Rodney works extremely hard to keep the town's streets looking neat and tidy, going above and beyond by weeding pavements and keeping Okehampton Town Council informed of any arising issues.

Okehampton's town clerk, Emma James, said: "He is friendly, approachable and always smiling. The town has never looked as clean and tidy as it does when Rodney is on duty."

Okehampton Hamlets Parish clerk, Jane Gillard, said: "Rodney is always smiling and happy to chat to anyone. He regularly pops in and out of the town hall to let them know of any issues and fairly often, there is praise for him on social media that attracts many positive comments. He is a credit to the area."

There was also a commendation in the Under 18s category, which went to a group of five Okehampton school children, who helped locate a missing cat following the disruption caused by Storm Eunice.