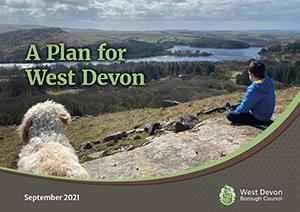 West Devon Borough Council has unanimously adopted its 20-year vision for the Borough.

For many months, the Borough Council has been developing a vision for the future and delivery plans for the next three years, setting out its priorities and the actions it will take.

This week following a summer of consultation and a recommendation from the Hub Committee, the Plan was formally adopted by the Council.

Cllr Neil Jory Leader of West Devon Borough Council said: "The Plan itself is a useful and impressive document, framing the themes and objectives that we as a Council feel are important and that this Plan should inform our work over the coming years.

"It is important to recognise that the Plan itself is not, and will, not be perfect, it will not do everything that everyone wants, but it will remain a dynamic working document that can be amended and improved via the HUB advisory groups, as time goes by and priorities change.

"Can I thank, all of the officers, members, consultees and partner organisations who have had input into the Plan.

"I was especially delighted to see photographs included in the document, taken by residents and I thank them for their work and their permission to use their pictures."

In support of the existing action plan and A Plan for West Devon's priority of Growing our Natural Environment, a motion was passed that agreed to support the Government's Environment Bill.

West Devon Borough Council said: "This Council has formally recognised the Climate and Biodiversity Emergency (May 2019,) has signed The Devon Climate Declaration (July 2019) and has a Climate Change and Biodiversity Strategy.

"This Council is committed to actions to change behaviour to address the causes of this situation and mitigate the impacts.

"In line with the above, this Council supports the need for a strong legislative framework that embeds the Government's targets in law, enabling us as supportive players, to plan and develop our future trajectories, to fit in with those targets."

Cllr Jory added: "Already we can see how our new plan dovetails nicely with the plans, priorities and aspirations of our communities and partners. We are already working with Devon County Council on the Climate Emergency Partnership and will continue to do so.

"Our themes and priorities allows us to support this motion as it follows the direction of travel we have set for ourselves.

"In this way the 'Plan For West Devon' will continue to provide us with a framework to work on and targets so we can keep on track and hold ourselves to account.  I am pleased that this has now been adopted and we can start working on its delivery."

You can read the adopted 'Plan For West Devon' here.