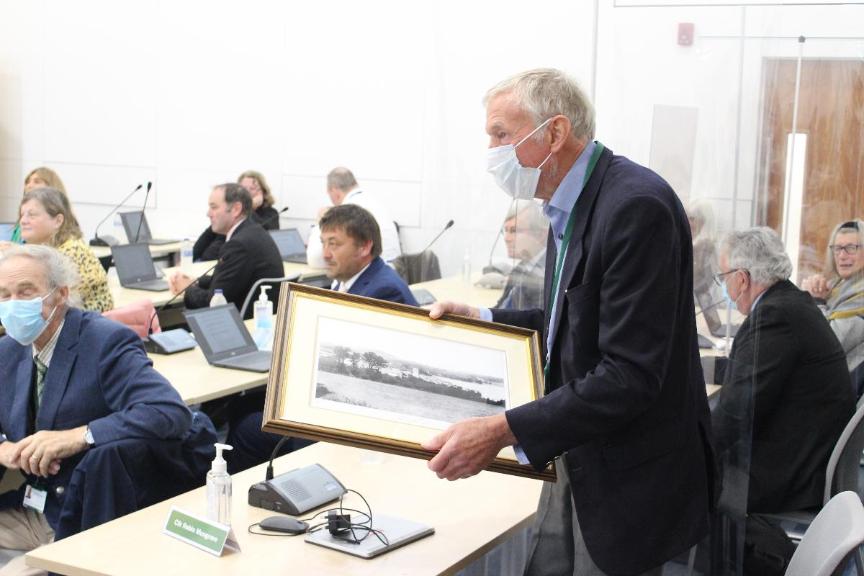 West Devon Borough Council Councillors from all parties express their gratitude as Cllr Robin Musgrave announces he is stepping down from his role on 30 September 2021.

Cllr Musgrave, who made the decision to step down due to health reasons, made the announcement at the Full Council meeting on 28 September 2021. He has been a familiar face at the Council for over 30 years. He was first elected as Ward Member for Bere Ferrers in 1991 and held the role for four years until 1995. In 2007 he was again elected as a Ward Member and re-elected in 2011 and 2015.

Cllr Neil Jory, Leader of West Devon Borough Council commented: "Robin will be sorely missed by everyone who has had the pleasure to work with him. His experience, knowledge and dedication to championing the needs of local residents mean he has been a very active councillor for his ward as well as serving on our Overview and Scrutiny Committee.

"We will be very sad to see him go, but understand his reasons completely as health and wellbeing must come first. Together with my fellow Councillors, we wish him and his wife all the very best."

After he announced to the meeting that he was standing down from his role, Cllr Musgrave said: "I have been very proud to be a Member of this Council and play a part in its significant achievements. Now I am standing down, I can perhaps enjoy reading about Council activities from afar. I'd like to wish the Council the very best in the future."

Cllr Musgrave has a background in the information technology sector but after a change of career he qualified as a teacher. For the last five years before his retirement he worked in a special school teaching young people with special educational needs. He has also worked with young people throughout his adult life in a voluntary capacity and has been particularly involved with the Duke of Edinburgh Award Scheme and the Tavistock and District Youth Forum.

Cllr Musgrave also brought a particular interest in sport to his role at the Council. He has been a member of the Tavistock Athletic Club, the Weir Quay Sailing Club and the Tamar & Tavy Gig Club and for many years he coached young athletes in the Athletic Club.

A notice of vacancy will be published shortly with a notice of election following in due course. In the meantime, people living in the Bere Ferrers ward are asked to contact Cllr Peter Crozier Cllr.Peter.Crozier@westdevon.gov.uk or tel: 01822 840270 if they need Borough Councillor help or support.