This website uses cookies to provide additional functionality and to help us to continue improving our online services. 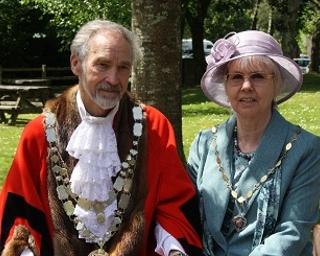 Regretfully due to the Covid-19 pandemic, the usual annual celebrations of the Awards have not been able to take place.  Once life returns to normal, the winners will be invited to formally celebrate their achievements with the Mayor.

As always, the Mayor received a high number of deserving nominations for awards which are given to local people who contribute to their West Devon communities.  This year's winners include five individuals who have consistently gone over and above with a genuine desire to improve the lives of others around them.

Cllr Leech recognised the impressive standard of entrants, saying: "I was very happy to see that we had a good variety of applications for the different categories that forms the Mayor's awards this year.  It was, as usual, very difficult to come to a conclusion as to who should receive the awards, and I thank Cllr Mott, and Cllr Musgrave for helping me with this task.  My thanks also go to Kathy Hoare for all the work that she puts into this process each year.

"It is with regret that we were not able to hold the usual awards ceremony after the March Full Council meeting, but we have sent out the awards to those who have won.  It is hoped that we will have a smaller ceremony later in the year, once we have managed to get over the present virus epidemic."

The winner in the Over 18 Category was June Wildman.  June is a founder member of the Tavistock Memory Café. Her work in the support and care of those living with Dementia in Tavistock has been remarkable. Her commitment and compassion to those family members who have faced Dementia challenges has undoubtedly made a significant difference to hundreds of individuals.

Dementia supporter, June said: "It came as a great surprise to hear I had won a Mayoral Award this year.  I feel very honoured and humble to receive it and hope I can continue to help those living with Dementia and their careers in the future not only through Tavistock Memory Cafe but also now in my capacity of Chairman of Devon Memory Cafe Consortium, which covers all Memory Cafes in the geographical area of Devon and liaises with Devon County Council and NHS on their behalf.

"Living with someone who has Dementia is never easy but in these trying times, maybe in self-isolation, carers certainly need additional support.  Thank you so much."

The 18 and Under Award Category has three praiseworthy winners this year.

The first award goes to Christabel White who has been nominated for being a fantastic role model for young people locally.  She has been leader for her local Brownies in South Zeal, helped regularly at her local pre-school and volunteered many hours at a local folk dance group for children. A well-known Dartmoor step dancer, she has won many competitions and helped promote and revive this tradition.

Brownie leader, Christabel said: "I would like to thank everyone who has considered me for this award. Being able to support the children in my local community has been a huge part of my life and I wouldn't have been able to do it without the support of my dance teacher for 8 years, Jenny Read and local musician Mark Bazeley, who have both supported and encouraged me throughout. I would also like to thank my family who have also supported me throughout, in both my new adventure at university but also in helping the local children in my community."

The second and third joint winners are Megan Letchford and Ella Kaye.  Megan and Ella set up a small enterprise called 'Charms for Change' of which all profits go to local charities. They make different jewellery items and sell via various social networks such as Facebook and Snapchat. They also go to various coffee mornings and events. Every time they reach £100 of profit they donate the money to charity, canvassing fellow students as to what charity to support. Currently they have raised an incredible £700.

Proud winners, Megan and Ella, said: "We are so thankful for the award we have been given. When setting up and running our small charity, 'Charms for Change', we were not aiming to gain any sort of reward ourselves, we just wanted to help those who were in need of a kind helping hand. However, getting recognition for something that we have been pouring our hearts into makes us so proud. Charms for Change has currently helped seven local charities by raising over £700, and will hopefully go on to help many more! Thank you to everyone who has supported us so far."

The final winner is for the Mayor's Green Award which this year goes to Frances Rickwood. Frances has worked at Okehampton Primary School for many years. Her role as Environmental Co-ordinator has allowed her to spread the message of caring for our environment to many hundreds of children. As an Eco School, the primary school has Green Flag status where judges had commented about the enthusiasm and knowledge of the children, who were clearly passionate about being 'eco' and being very proud of their school.

For more information on the Council's annual Mayor Awards, please visit their website at: www.westdevon.gov.uk/MayorsAwards2020